LiDAR 3D mapping is a versatile technology that unlike passive sensing methods such as photogrammetry can penetrate vegetation and operate in dark lighting situations. LiDAR is a more applicable, user-friendly technology providing data that is faster and easier to process.

Phoenix LiDAR’s aerial solutions allow you to scan area swaths faster and with more consistent results than using current ground scan technologies, whether they’re utilizing terrestrial or mobile mapping methods. We’ve created this section to help our customers and the public learn about LiDAR and what makes our solutions a unique, ground-breaking tool for a variety of applications. 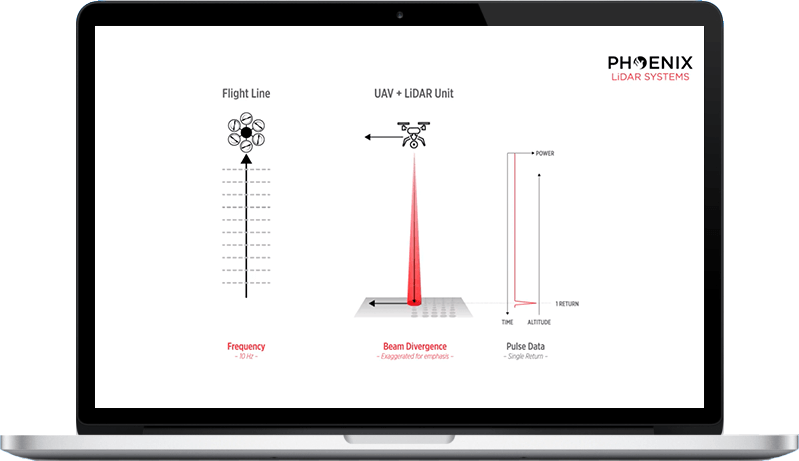 Basics of LiDAR
The Basics of LiDAR LiDAR, short for Light Detection and Ranging is an active, remote sensing method used for an array of applications. It uses light in the form of a pulsed laser to measure ranges (variable distances) through vegetation to the Earth. The system is able to capture accurate surface data by measuring the time it takes for the laser to return to its source. LiDAR requires four basics parts to operate: These light pulses and their capabilities to produce multiple returns — combined with other data recorded by a system — are processed to create highly accurate, three dimensional information about the surface it has scanned. 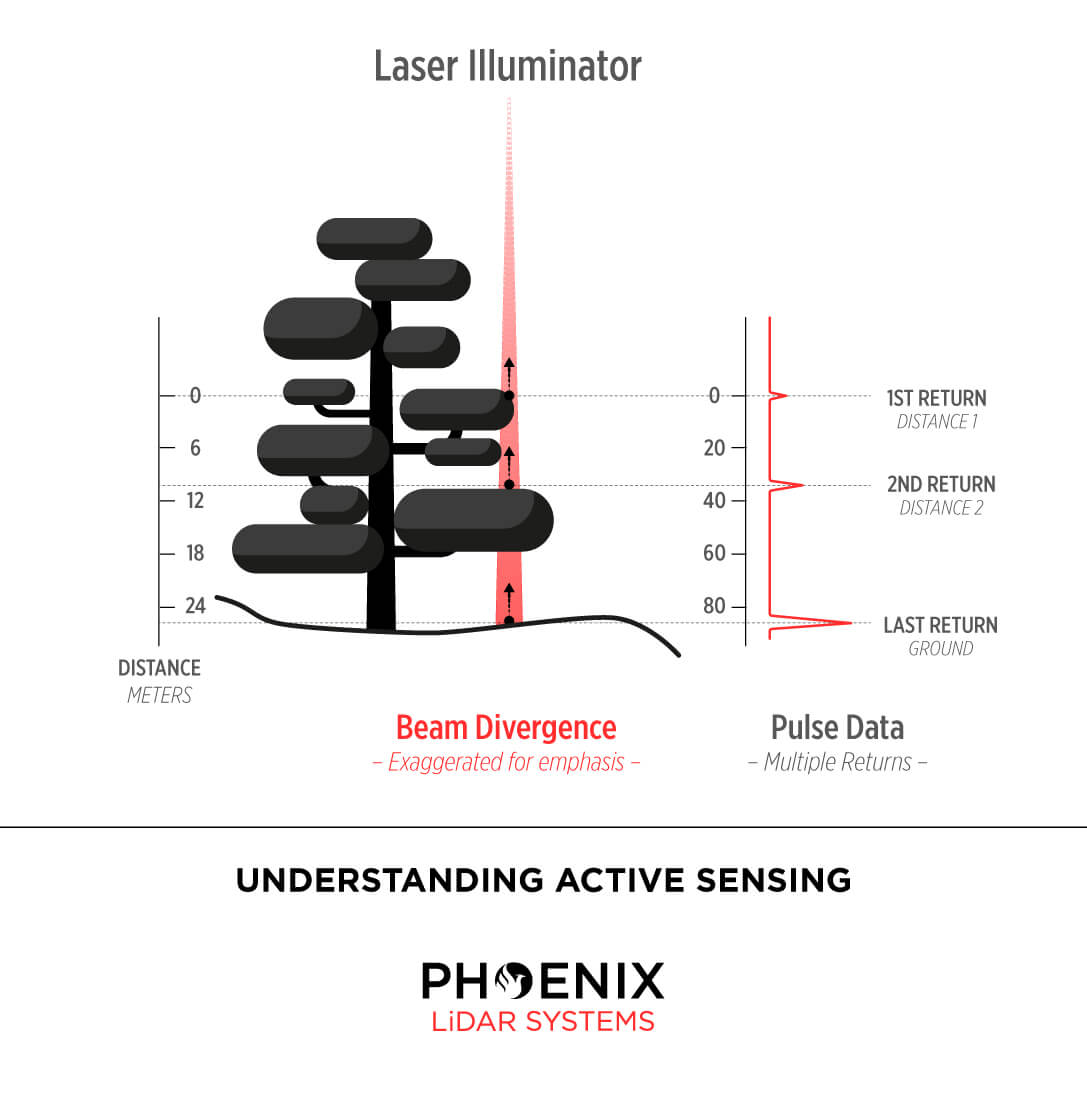 How Does LiDAR Work?
The technique we use to derive centimeter level precision is called Real Time Kinematic Global Navigation Satellite System (RTK GNSS). This system uses the satellite signal’s carrier wave in addition to the information content of the signal and relies on a single GNSS reference station to provide real-time corrections. Now what happens during short periods of GNSS outages? Enter the Inertial Navigation System (INS): the INS uses a computer, motion sensors (accelerometers) and rotation sensors (gyroscopes) to continuously calculate the position, orientation, and velocity of the system. In order to combine the two systems, a very sophisticated algorithm, known as a linear quadratic estimation (LQE), operates on streams of noisy sensor data to produce a statistically optimal estimate of the system’s position at any point in time. By fusing this information with the LiDAR data, a point-cloud is generated and visualized in real-time using Phoenix Aerial SpatialExplorer. In case real-time corrections from the GNSS reference station are not available or longer outages prevent transmission of data to Rover, a third party software package called Inertial Explorer™ can still produce a precise trajectory in post-processing. Both types of trajectories (either generated in real-time from the INS or from Inertial Explorer™ in post-processing) can be fused with LiDAR data with Phoenix Aerial SpatialFuser to create point clouds in LAS format. Phoenix Aerial LiDAR solutions are engineered to attach to almost any vehicle and for the first time, the accompanying software is just as flexible as the module. By splitting sensor control and user interface into separate parts, multiple mapping options are possible: Aerial Mapping Phoenix Aerial LiDAR solutions can be used for mapping with many different vehicles such as UAV’s, gyrocopters, fixed-wing aircraft, etc. As shown in the image above, the operator is typically on the ground and connected directly to the GNSS reference station. Using the Phoenix Aerial SpatialExplorer software, the operator transmits correction data to the Rover via a long range WiFi system. The Rover then fuses this data in real time and transmits a down-sampled point cloud back to the operator. Ground Mapping When the operator travels with the Rover in a car, boat or ATV, he/she can connect directly to the Rover using either WiFi or an ethernet cable. Correction data can then be transmitted from the GNSS reference station to SpatialExplorer software via long range WiFi or a public IP address (using e.g. 3G/4G). With the on-board 240 gig SSD hard drive, the operator can scan for 6 hours without having to stop to download the data. Real-time Point Cloud Advantages The ability to visualize real time point clouds brings several key advantages: 1) The operator can immediately determine if the results match the expectations. Previously, results were available only after landing, in which case it becomes very time consuming and expensive to make any changes. 2) The operator can visualize the growing point cloud on a computer screen in real time and with this data can locate areas yet to be scanned and quickly alter the UAV’s course. 3) Via 4G network, the operator can remotely share his/her screen with clients in real time to confirm/alter LiDAR point cloud. 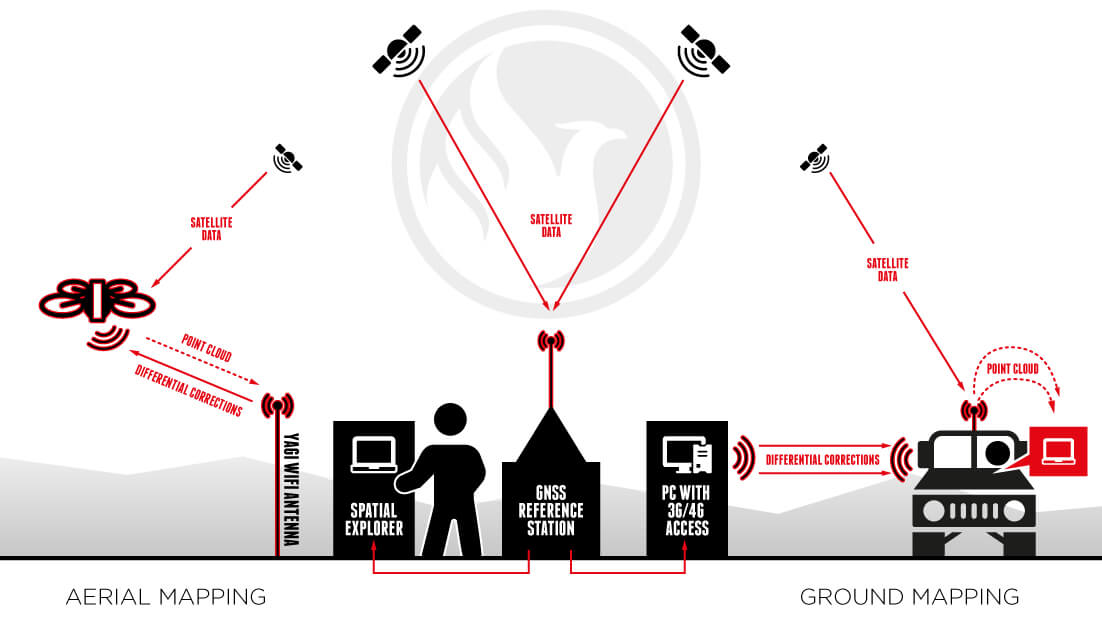 Parameters for LiDAR Scanning via UAV
Phoenix LiDAR Systems builds systems meant for mobile mapping. Surveying from a moving object is accompanied by certain parameters an operator must take into account: speed, scan area, altitude, frequency, pulse rate, scan angle and point density all play an integral role in capturing data. Note that you will obtain a scan swath of varying ranges and densities depending on these parameters. Actual accuracy is dependent on GPS processing options (RTK, PPK, WAAS), ionospheric conditions, satellite visibility, flight altitude (AGL) and other factors. 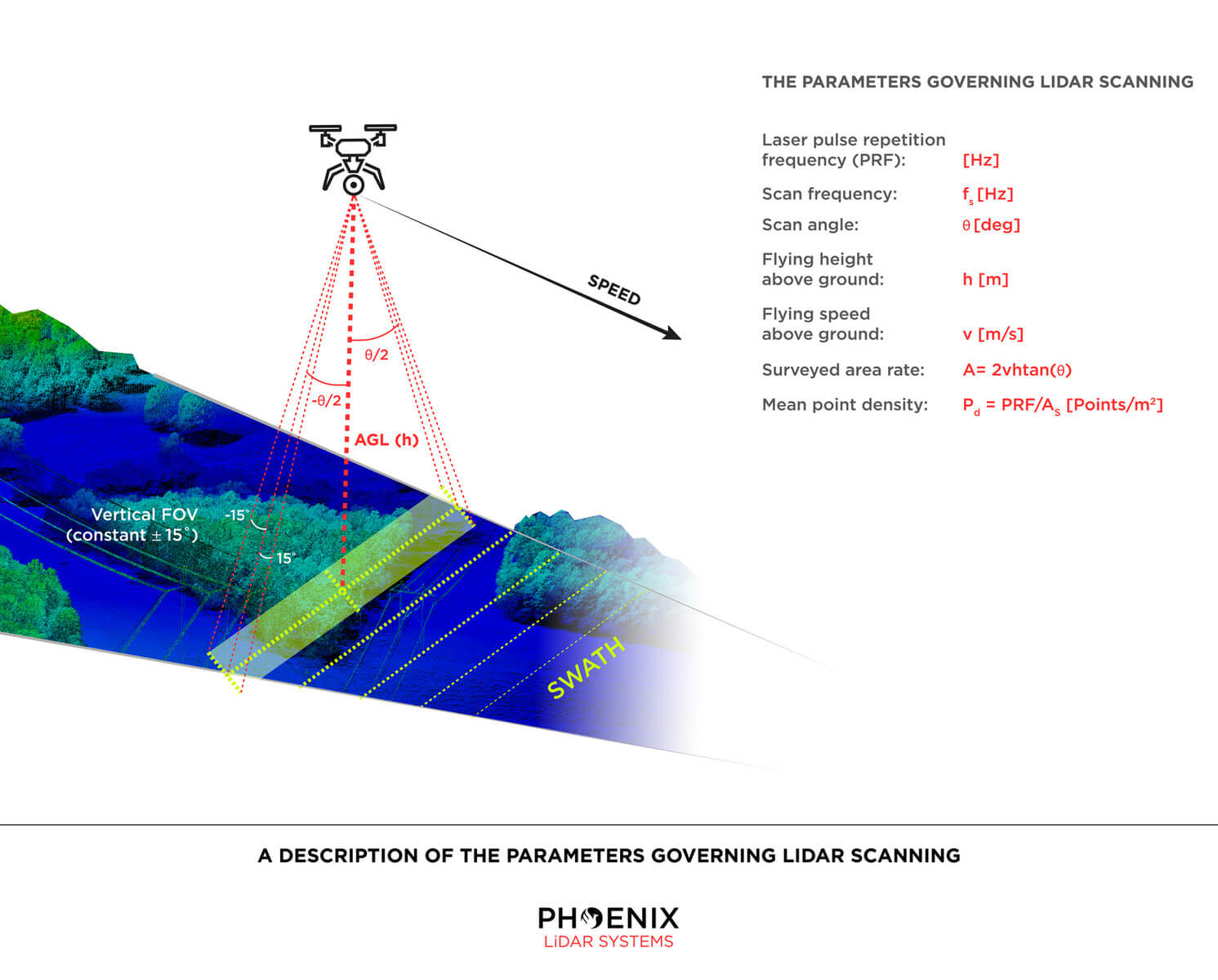 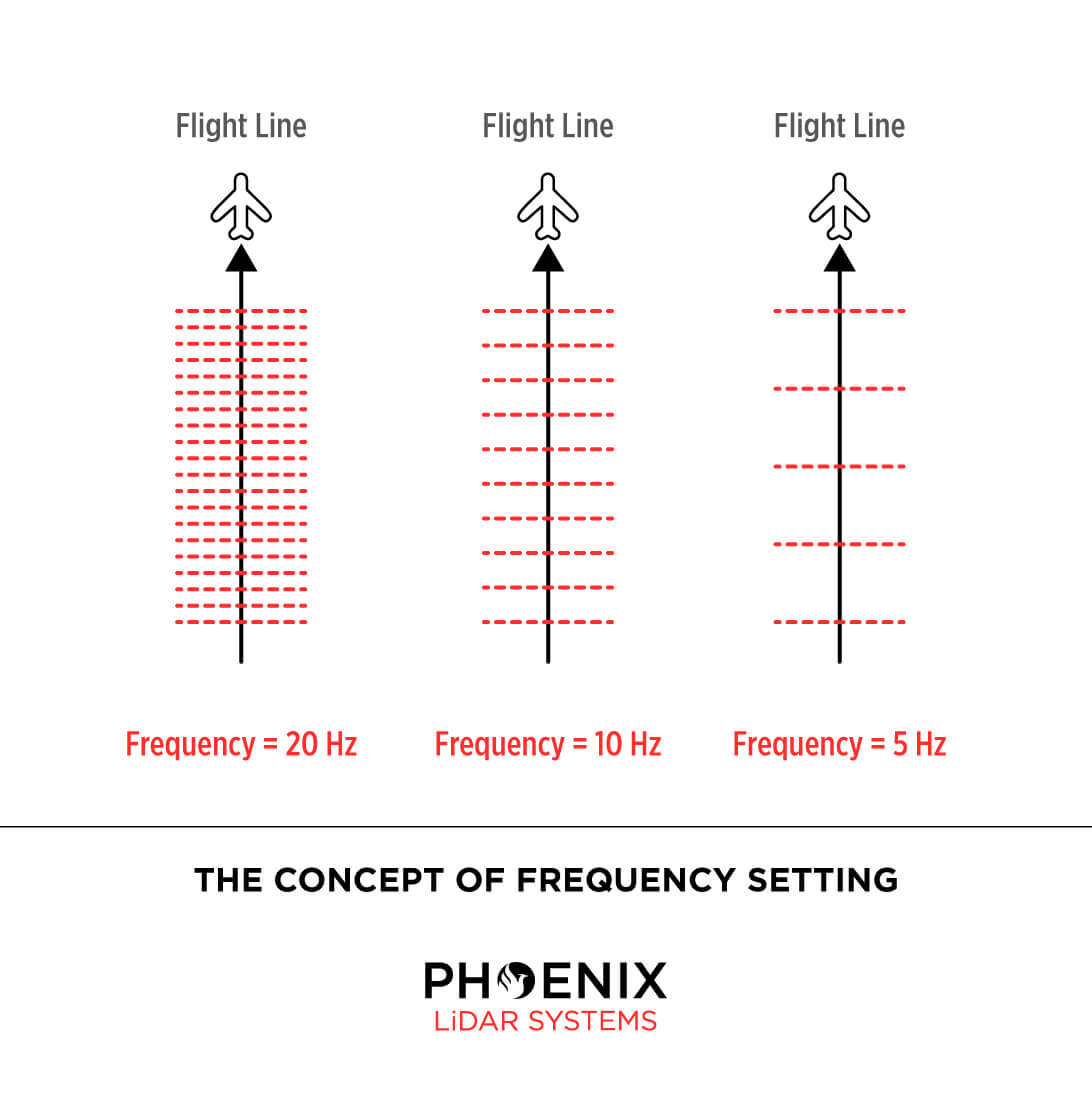 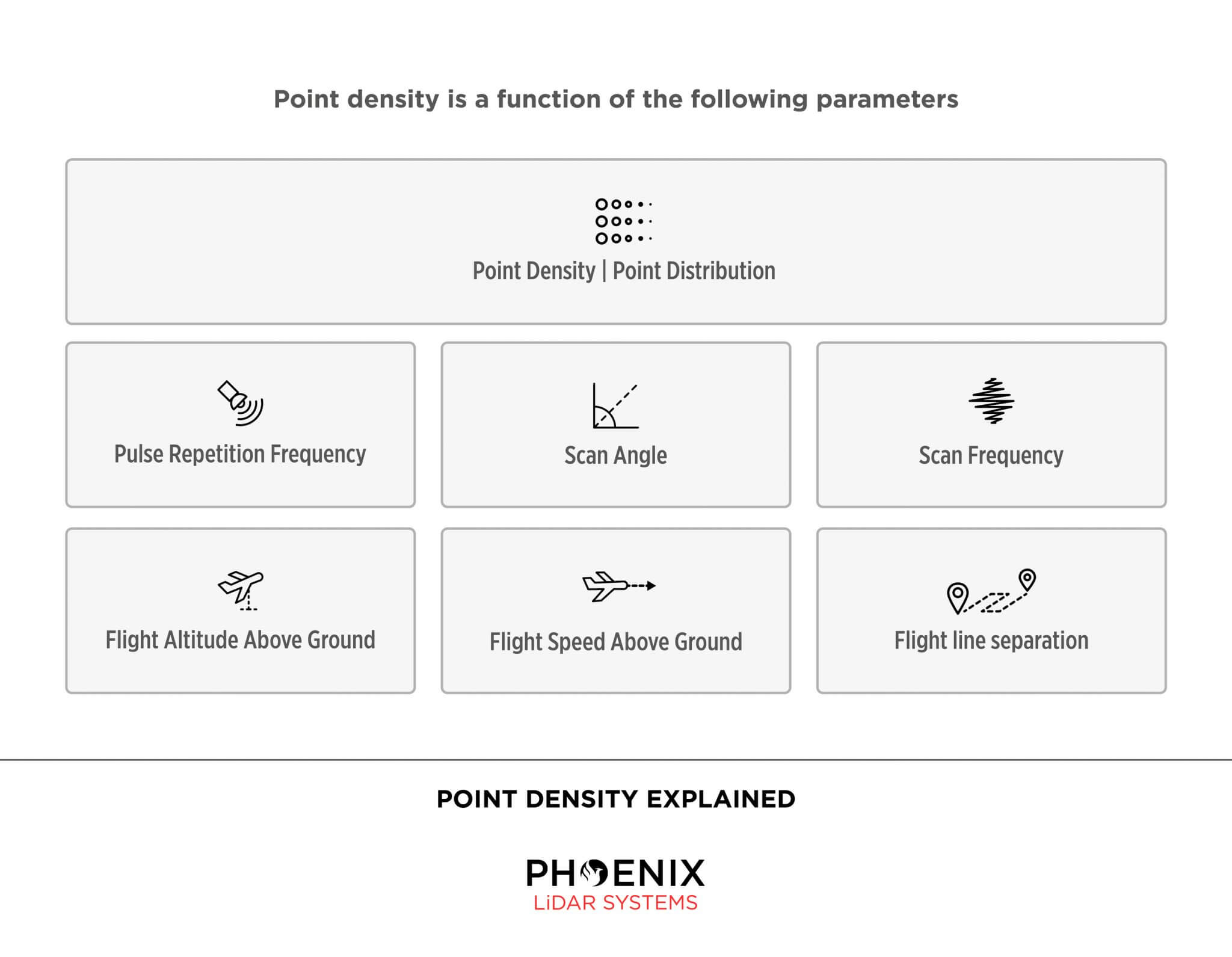 Phoenix LiDAR Workflow
Real-time vs Post Processed In RTK (Real Time Kinematic) mode, about 500 bytes of differential corrections are sent from the reference station to the rover about once every second. Applying these corrections, the rover is able to solve its position with centimeter-accuracy. The differences between RTK mode and post-processing are: 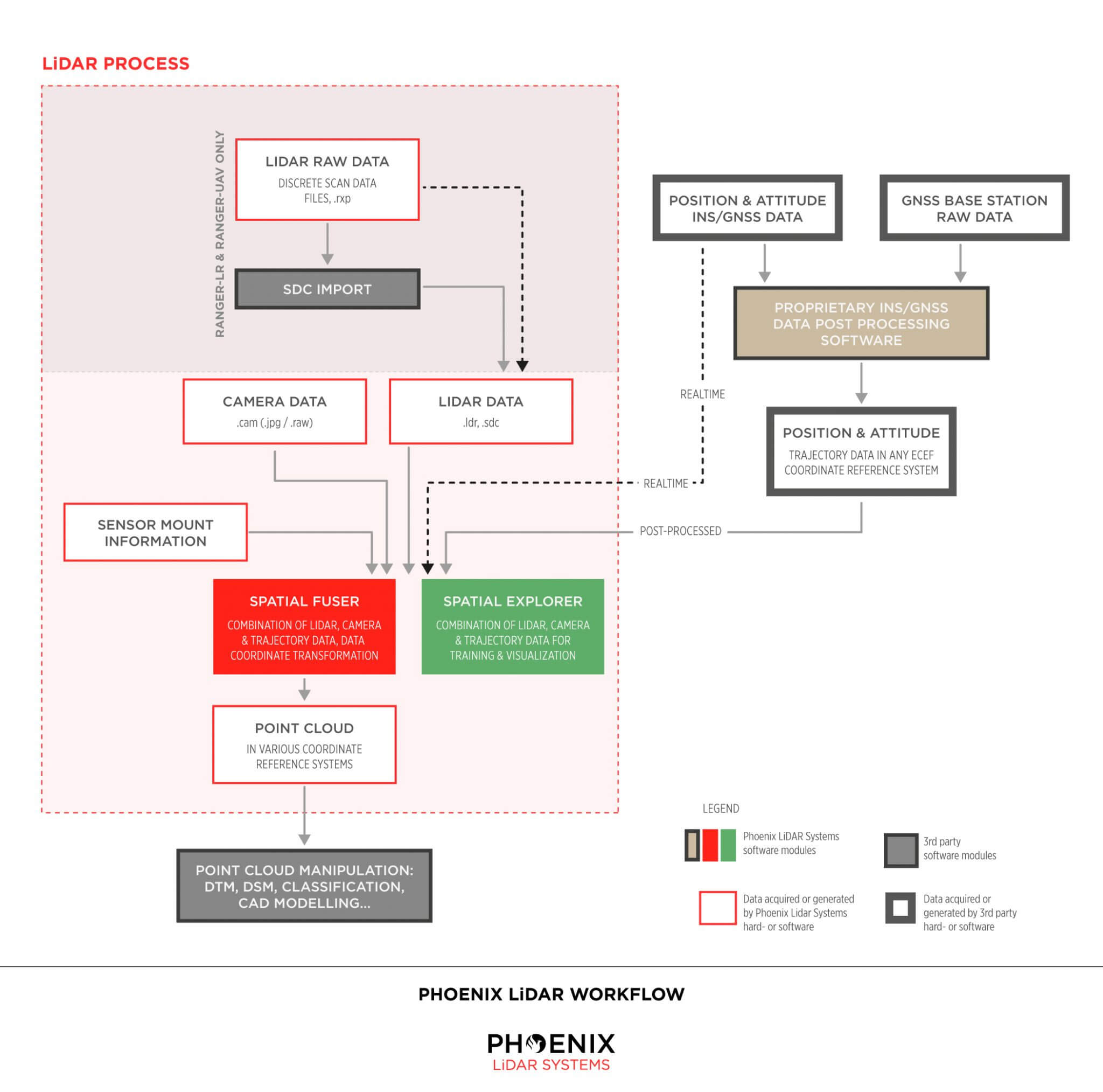